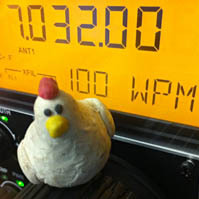 Andrew has not received any gifts yet

How many years have you been performing QRQ CW
x

What speed do you like to run QRQ CW
x

Your favorite headphones or speakers for listening to cw
x

What has been your most effective way of training practice, to copy and send qrq cw
x

Thank you for the words of encouragement. I wouldn't have gotten where I have with CW in such a relatively short time if it weren't for the great people who encouraged, supported, and shared tips and information with me. Pierpont (and his FB book), W3NJZ, W5UX, W4BQF, KM4BI, and many many others...too many to list.

With me there was a strange phenomenon happening wherein I would be able to qso comfortably at certain speeds, then actually understand more at a faster speed due to word comprehension activating, then if I fell out of the "groove" and my receiving train of thought derailed, the person might QRS for me from say, 45 wpm to 35, and then suddenly I received absolutely nothing. I believe this was a result of my trying to go too fast toward QRQ prior to achieving the basic skill of reading a string of letters one by one, at low to medium/fast speeds of 25-45 wpm. I was in too much of a hurry to join in with the skeds of the QRQ ops I looked up to. I need to make sure I have the basic qso skills that many of the more experienced ops take for granted since they have, in most cases, been practicing them for decades. My motives were pure, but my implementation was a little hasty.

Now I try to make several contacts on 40m and other bands daily, and also my local friend Ralph (KM4BI) makes at least one sked a day with me on 10m, where we have paddle and bug qsos with speeds ranging from 30-45wpm (my sending isn't quite up there, but I am getting accurate at around 37-38 with a paddle after a 1min warmup or so).

I want to try and be more like my pal Bob, W5UX, in attitude. He patiently practices every day, admits progress can be slow, yet he persists steadfast in the hobby of CW sending and receiving and enjoys himself.

In a text from Fred Ryan W3NJZ, he mentions that there is only one operator he worked with who was able to send at QRQ speeds, but was hampered only by his receiving capabilities. I believe he was referring to me. I wa

Brett Miller said…
Ok....I guess I filled up the buffer...I'm not too great at this social network concept...no Facebook, etc.

I was able to send at around 85 wpm on a QWERTY keyboard with no effort whatsoever, and with a bit of concentration, Chuck AA0HW may recall my sending to him at ~105 wpm on several occasions while he came back at slower speeds (40-55 or so but I didn't always get solid copy even at those speeds). We often had a good signal between us, him being in MO, and me in Tennessee. In any case, it wasn't too difficult for me to adapt my already existing touch typing skills (I had two typing classes in high school, and have done a lot of C and assembly programming in my lifetime) into conversational morse, although my snippets were no doubt very far from the amazing dialogs we hear in the 5 star nets, or the fb nets of the FOG and CFO of today.

So my point with that is that I recall Fred and I discussing my receiving ability lagging far behind my sending abilities. Of course, I had only known the code for about 1 year's time and I think I just need a lot more experience to fill in the gaps. Taking a page from Bob's book, I have learned to enjoy qso's at any speed, even though I would like to go faster. For some reason (even though I regret that my hiatus from ham radio was so lengthy) it seems like the break did me well, and although it took me a month to knock off the rust, things are starting to come easier now, both with paddle sending and receiving...at QRS, and a bit faster. I know some people set chronological goals, but I am going to try and hold off on that for now and just enjoy the code for what it is.

Life is about the journey...not the destination...and it surely isn't a race. If you get it too much of a hurry, you'll ruin the trip.