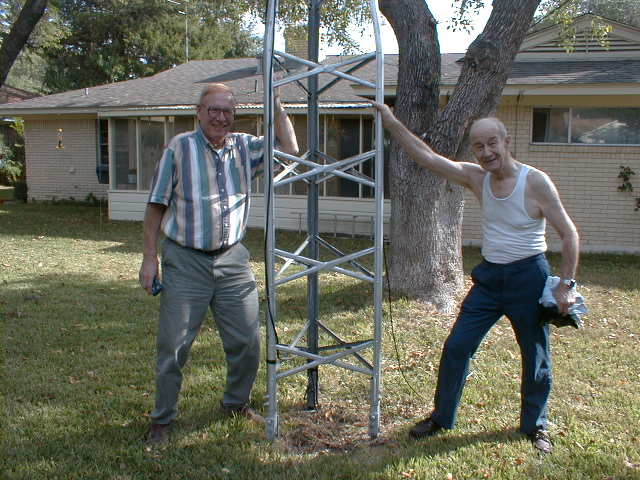 The following is presented as a remembrance of two Fast Operator Group (FOG) members.  Ken, W9LRV, passed away in January 2013, and Fred, W3NJZ, passed away in March 2012.  Those of us who operate the FOG certainly miss them.

Ken, W9LRV, was licensed in 1940 as W0LRV, and taught CW in the Army.  He liked to point out that he never got a Worked All States award.  It was Ken’s way of saying that his enjoyment in ham radio was CW rag chewing.  Anyone who worked Ken knew that he took a genuine interest in learning about those he worked.  During the mid-1970s, Ken got a K4KN keyboard which he continued to use for the rest of his life.  During that time, Ken could often be heard on the air as K5HIB working keyboard regulars like W2KFA, and K4KHT at speeds in excess of 60 wpm.  In 1995, Ken started regular Monday keyboard QSOs on 40 meters with KF7CX.  Eventually, W5SKD, and W3NJZ became regulars, and the Fast Operator Group was formed with Ken as FOG #1 (Ole Foggy).  It was around that time that Ken changed his call to W9LRV.  Ken continued to show up for Monday and Thursday FOG QSOs over the years.  In addition, Ken also enjoyed a weekly sked with K2TO on 20 meters most Fridays.  Despite the fact that his sending speed had slowed down in recent years, he could still send at high speed for short bursts and his high-speed copying abilities remained excellent.  While most of his sending was with the K4KN keyboard, Ken could also send well with a bug.  He liked to tell the story of buying it for $3 in 1940.  There can be little doubt that most of the good CW rag chewers on 40 and 80 meters had worked Ken at some time.

Fred, W3NJZ, was a competent CW operator for many years, but he had not been a high-speed operator.  Around 1995, he decided to work on building up his CW abilities and quickly made progress.  He began getting on the air with the Fast Operator Group (FOG #5), and the even faster Speed Operators Bunch.  Eventually Fred was able to send and receive at speeds around 100 wpm and became interested in promoting high-speed CW operation.  In recent years Fred could be heard with the 40 meter QRQ CW group on Saturday afternoons and with the FOG on Mondays and Thursdays.  Fred’s ability to get an interesting discussion started during FOG QSOs was always appreciated.  He constantly practiced his sending which always sounded great on the air.  During Fred’s last FOG QSO shortly before his passing he was weak and in pain, but he continued to send amazingly well.  Fred’s sending and receiving were particularly impressive considering that he had carpal tunnel problems with his hands and a considerable hearing loss.  Fred will be remembered as a guy who always liked a challenge.  He once bet W9LRV that he could learn to send at 40 wpm with a bug.  Because of that bet, Fred liked to end each FOG QSO with some sending on his bug.

I got interested in QRQ CW in 2008. Both of these guys helped and encouraged me on the air and through emails sent with tips on how I could improve my sending and receiving speeds. They are missed.

I was amazed at how Fred was able to copy qrq speeds up to around 125 words per minute in spite of almost being deaf and having to use an advanced hearing aid in the one ear that still had some remnants of function left in it...He also was able to type qrq cw on his IBM keyboard from 80 wpm to up and over 100 wpm, in spite of carpel tunnel surgery and arthritis in his fingers - barely having any sensation left in his finger tips to geolocate where the actual keyboard letters were -  he touch typed without looking at his hands.

As Fred faced the horrors of his final illness, he really inspired me by his courage to go to battle, and agree to have very invasive and difficult surgeries,  with all the emotional and physical strength he could call to bear,  to wage war against the ravages of the pertinacious Grim Reaper.