OPERATING CW AT SPEEDS Of more than 60 WPM 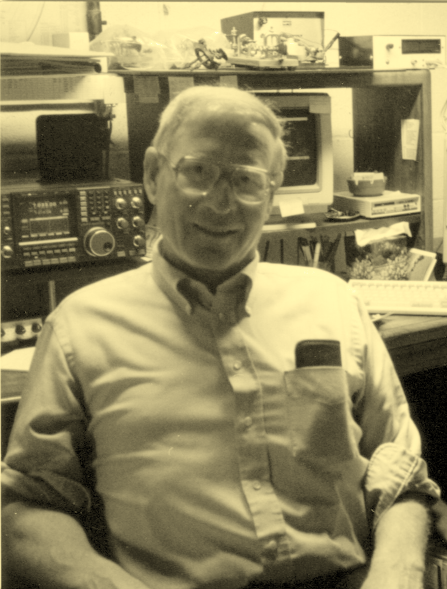 Greetings! Although I have been a CW-only operator for almost 60 years, I just joined the FISTS club, realizing that it wasprobably the sole remaining organization active in promoting CW operating. Sorry to be so tardy in recognizing that. Upon joining FISTS, I asked NancyKott if an article on high-speed CW might be of interest to the FISTS members. She encouraged me to write this article, as manyhad inquired about how CW operating at high-speeds is accomplished. The following is about how I accomplished that. In discussions with other high-speed operators, it appears that they used similar techniques. Their approaches differ in some respects however, and if you will obtain a copy of Bill Pierpont's latest printing of his book, "The Art and Skill ofRadio-Telegraphy”, third revised edition, itcontains an appendix on high-speed code with the viewpoints of others included. Bill was a great teacher, and I hope to explain things about high-speed code operating that will be a fraction as good as his excellent text. CW operators lost a good friend last year when Bill passed away. My article will be broken into two sections: comprehending high-speed code, the second, sending high-speed code. COMPREHENDING HIGH-SPEED CODE Let me first define some of the terms that I will be using. "High-speed" means rates over 60 wpm, and up to well over 100 wpm. "Comprehension, means understanding the code "by ear" without the use of computers. It differs from code where a hard copy is required, such as in the old copying contests or in the relaying of messages. It is of a conversational nature, and is frankly, the most enjoyable form of CW in that the information exchange is greatly enhanced and approaches normal conversational speeds. It requires work to achieve, but in my opinion, is not all that difficult to master. If you have average CW skills and sufficient desire, it can be accomplished. When many of us first learned code, itwas by memorizing the combinations of dotsand dashes and relating them to the various letters and numbers. As pointed out by Bill Pierpont in his book, that is a terrible way tolearn code.One should learn the sounds of the letters and not dwell on the dots and dashes. Once one learns the sounds of the letters and constructs words from them, letter by letter, and puts down the pencil, speed increases up to around 55 wpm are just a matter of practice to achieve. One then runs into a brick wall and further improvement becomes more and more difficult. Many hams have run into thatbarrier and just thought that they had reached their personal limit. That simply is not so. At about 55 wpm it becomes difficult to chain the letters together to form words as the letters are just arriving too quickly toaccomplish that. Another style ofcomprehending code then starts making sense. You must learn to stop concentrating on the individual letters and let your brain dothe work of generating the word. You are, ofcourse, still aware of the individual letters, but you let the brain tell you what the wordis. It's exactly like learning a new language.Most of you already do that subconsciously on common words like "the", "and", etc.

That process must be extended to all words. It can only be accomplished over about 60 wpm, as the letters are arriving too slowly at lower speeds to allow one to recognize the "sound” of the words. The barrier at 55 wpm can be difficultto overcome if you have had years of practice sticking to the comprehension of individual letters. For me, it took about two years to go from 55 wpm to over 70 wpm. Others have done it much quicker than that. The surprising thing is that, using this technique; one can comprehend code much easier over 60 wpm than below. In fact, the comprehension becomes easier and easier as the speed increases beyond 60 wpm, not harder, as the "sound" of the words becomes easier to grasp because of the higher speed of the arriving letters. That isexactly the way we learn to talk. The words are spoken and we learn to recognize the word's "sound". If we had to figure out wordsby having someone say them slowly, letter by letter, we would be largely illiterate. The spelling of the words comes at a later time in order to allow writing and reading. It is not important for speech, however. Shortly afterlearning to comprehend words in learning to speak, the words are put into a flow of thought, such as a sentence. The application of this process to comprehending C W well over 100 wpm will be discussed later. Making the transition from constructing words, letter-by-letter, to comprehending them directly takes effort. I can't suggest that you listen in on other high-speed operators to improve that skill, as there are few still active on the bands. George Hart, W1NJM has ceased operating his high-speed code practice sessions.When I made the transition there were more high-speed groups active than presently, and I would tape their sessions and play them back over and over. Some of us are still active a few times a week close to 7.032 MHz, or during the winter, close to 3.532 MHz. That is the FOG, or fast operator's group, and typicallyoperates between 55 and 70 wpm. Another group that is currently inactive, but will hopefully resume activity, is the SOB group, or the speed operator's bunch. When in operation, their speeds vary from 70 wpm to over 100 wpm. They operate on frequenciesclose to the FOG frequencies. In the absence of many active high-speed groups, I have a couple of suggestions for breaking that "brick wall" at55 wpm. Make up some tapes or computer documents with your own messages and play them back, over and over. When they become too well known, make up new ones. One thing I recommend is to create a list of words commonly used in conversations. Instead of just making up a text of them at, say 60 wpm, use an analogy of the Farnsworth method and send the words at 70 wpm, but allow large spacing between the words. This can be done using a memory keyer such as made by MFJ, or one of the computer CW programs for sale that allow for that. Repeat the same word over again two or three times before moving on to the next word-It is impossible to comprehend words at that speed by constructing them from the individual letters. That forces you to grasp the entire wordinstead. It is not an easy transition to make, but stick with it. After you feel that you can comprehend code over 60 wpm, try joining into one of the active high-speed groups.When you feel ready to take that step, another problem comes into play. In order to comprehend the words directly you must be completely relaxed. It is easy to become intimidated by the other operators. Once you cease to be relaxed, all is lost. You will misscomprehending an important word, tighten up, and drop back to comprehending letters. All you can hope for is to run into someunderstanding high-speed operators who have gone through the same learning experience, and who really want you tobecome one of them. I was very fortunate to have had some very patient high-speed operators to help me along, Tom, W4BQF, Larry, N8LN, and Ken, W9LRV.

Hopefully there are some such people within your reception area. I would like to make a few final comments about high-speed code comprehension. I know of no high-speed code operator who uses a computer program to comprehend the code for them and display it on a screen. There are two reasons for that. The very most important reason is that it would remove all of the enjoyment of operating CW. I love the CW language, and using it gives me great pleasure. Reducing it to a computer-generated copy would bring no joy to any CW operator. It would be just like operating RTTY or digital modes. The second reason, completely subservient to the first, is that the comprehension programs that are on the market are completely outclassed by the human brain in understanding CW, through the typical band conditions of heavy QRM and QRN. Anyone who uses a computer to comprehend the code soon loses interest and drops out. Finally, a few comments on what I think the ultimate speed of comprehension of CW is. In my opinion it is from 200 to 300 wpm, similar to our limits of speech. That limit, of course, is greatly reduced if we are trying to explain something very complicated and technical. One must drop down in speed considerably to form your thoughts on such subjects, and for the other operator to understand what you are saying. That isalso true when speaking. Learning to comprehend words will get you up to around 100 wpm. To get faster than that you have to stop paying attention to the individual words, and just follow the flow of thought, just as we do in ordinaryconversation. I have not yet accomplished that, probably due to the absence of operators who can send quickly enough.One person who has is Tom, W4BQF. He can follow the flow of thought up to 140 wpm. You have to realize that we spent many years learning to speak quickly.Speaking quickly is much easier thansending CW quickly, so that comparable amounts of time would be required to get to over 200 wpm, and with nobody capable ofoperating a keyboard that quickly, you get no practice. In the subsequent sending section, one suggestion for achieving that will be discussed. One might ask, "why bother mastering CW at speeds over 60 wpm?". In addition to its being much more enjoyable than low speed CW, I have always found that achieving something new is one way of keeping young, It always bothered me to find that others could do something that I couldn't do. Learning to do new things, like high-speed CW, keeps the brain from atrophying. Another reason is that CW is a superior language, compared to speaking. It is digital in format and, if proper spelling isused, comprehension is unaffected by things like bad pronunciation, dialects, or just poor speech. If it is sent perfectly, it is comprehended perfectly. Try that with speaking to some people in the English language!