Every computer MICROPHONE INPUT jack,  has its own voltage and current that is already built inside it, in order to power Electret Mics.  By modifying a very simple and low voltage square wave generator circuit to make use of this MIC VOLTAGE, a very simple and NO BATTERY NEEDED -  EVER -   code practice oscillator can be made using this circuit, the MIC JACK,  and  an AUDIO to MIDI technique to regenerate the original input cw tone from this LM3909 and convert it to an amazing sine wave shaped cw note.

Here is the circuit used for this: 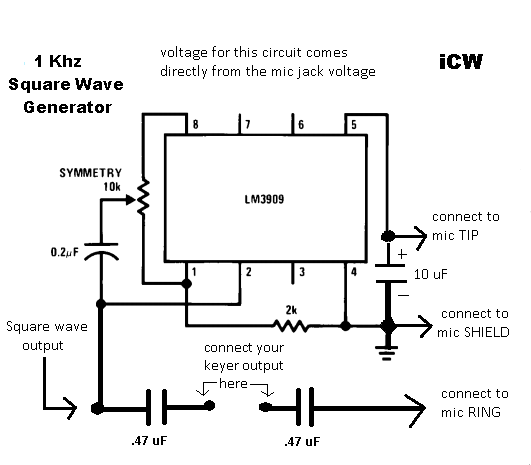 This video demonstrates an experimental setup for powering a CODE PRACTICE OSCILLATOR css555 MICRO POWER, LOW VOLTAGE TIMER circuit from just the voltage and current available at any sound card MIC JACK. This example is for a STEREO MIC jack. [ This technique will also work on a mono jack too, but the MONO MICROPHONE /css555 circuit is different and will be demonstrated in a follow up video later on in this series. ] The micro power and low voltage mode of the css555 timer chip is the key ingredient in this stereo mic powered CPO CIRCUIT. You are able to hook as many keyers, bugs, straight keys, etc, all at the same time, to this circuit to key this CPO. AUDIO to MIDI is used to regenerate the cw tones. A 15khz output tone from the css555 is utilized for maximum performance from the REAGATE VST PLUG for AUDIO to MIDI technique which outputs midi NOTE ON and NOTE OFF data, precisely duplicating the original length of the dits and dahs from the keyer(s) output, also pitch midi messages are delivered to the software CPO - SATYR, that is keyed by these midi messages.

NOTE: the voltage measurements on my mic jack were 2.2 volts - no load, and 1.6 volts with this circuit engaged in a "key down" condition.

An experiment with a TLC 555 low power timer chip proved to be successful in working in this circuit. This circuit is powered only by the internal voltage of the MICROPHONE INPUT JACK of a laptop. 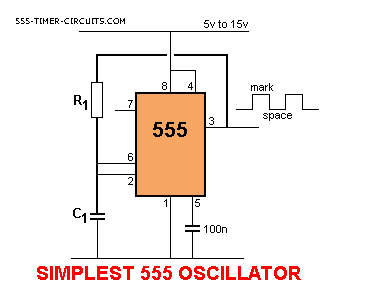 I also hooked up a scope and tested how much the voltage could be lowered and see that there was still output from the 555 chip oscillator....I was able to go down as low as 1.1 volts to work with the TLC 555...it might be worth trying this TLC 555 chip first,  before purchasing the CSS555.

HERE ARE THE BASICS on the TLC 555 data chip 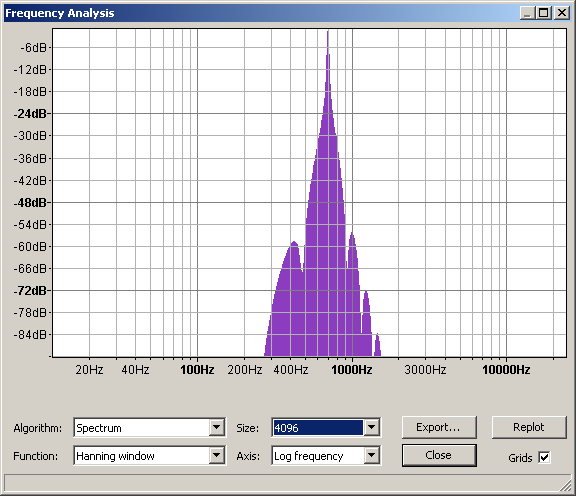 HERE IS THE LATEST VERSION OF THE css555 CIRCUIT

click on diagram to enlarge to full page view 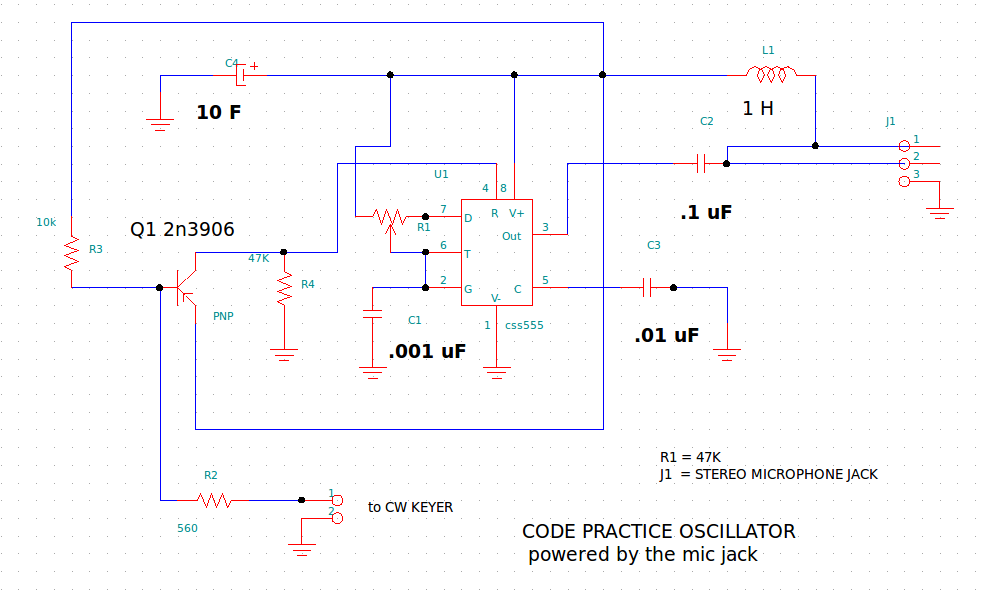 - The 10 F cap stores the 2.5 volts from the mic jack power, acts like a small battery pack

- The freq of this css555 CPO circuit is 20khz, which gets converted to a 700 hertz sinewave sidetone by the AUDIO TO MIDI software VST PLUGINs - REGATE and sineCW

- The current drain of this circuit using the "stock unprogrammed css555" or the TLC555 is around 250 uA.  The maximum current that my mic jack can sink using both TIP and RING in parallel( stereo mic ) is about 850 uA.  The 10 F cap supplies most of the current to the circuit during keydown, and during keyup...the CAP will recharge slowly back to @ 2.4 volts.

Here is a picture of the css555 20khz waveform which goes to the computer sound card's mic jack input in order to be converted to a 700 hertz sine wave CPO by REAGATE and sineCW VST PLUGINs. 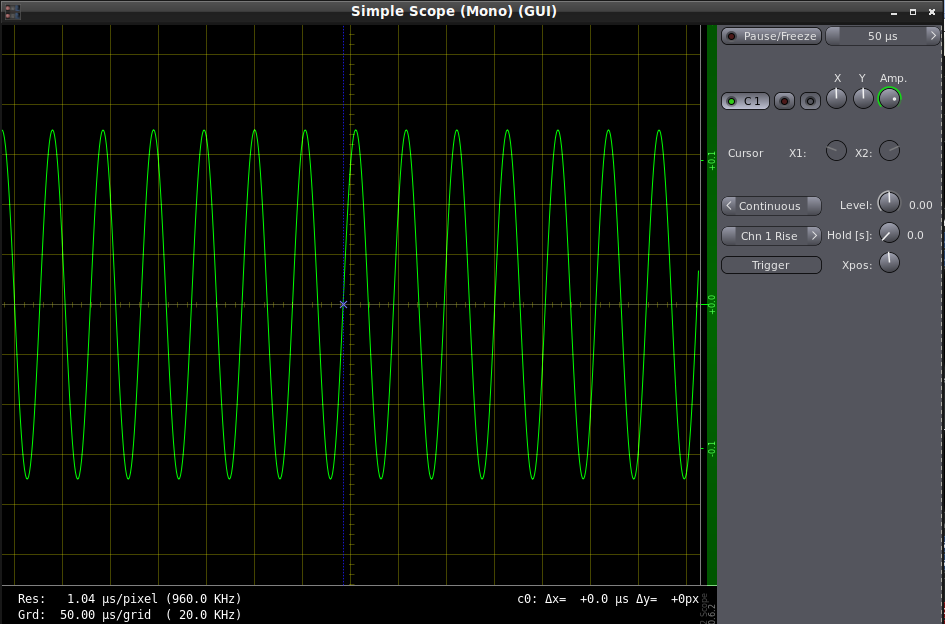 With different cap/resistor values you can of course modify this circuit to generate any audio frequency.  I am choosing 20khz for optimal results for regenerating the cw elements using AUDIO to MIDI conversion.

I thought it was interesting that this css555 circuit produces a sinewave instead of a square wave.  Here is a picture of the audio spectrum analysis of this circuit showing one predominant frequency at @20khz. 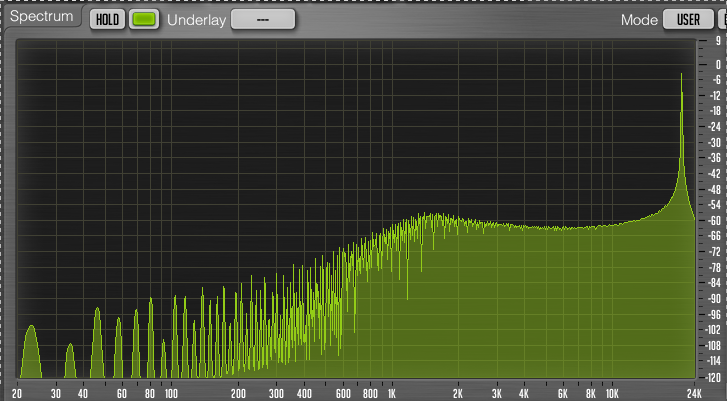 The AUDIO to MIDI conversion is extremely accurate in its timing and reproducing exactly the same length of the original cw elements and the spacing between them.  Here is an example of a test stream of fast dits keyed from my LOGIKEY K1 KEYER, which keys the css555 circuit just like it would key a rig and the resultant dit lengths and space between dits are exactly the same on all of them. 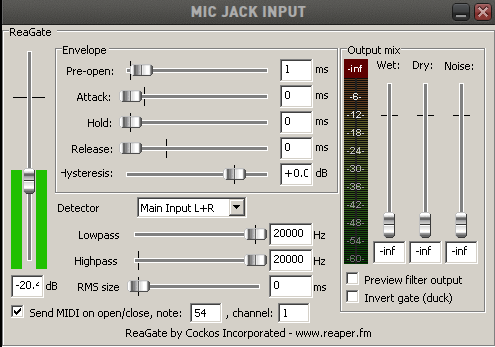 Here is the actual plugin that is generating the MORSE CODE AUDIO TONES with adjustments for RISE and FALL time,  post bandpass filter settings to minimize key clicks and edge noise - sineCW 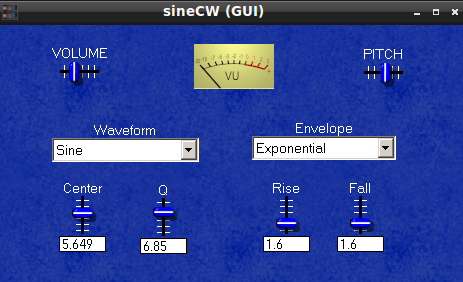 Here is the audio spectrum analysis of sineCW 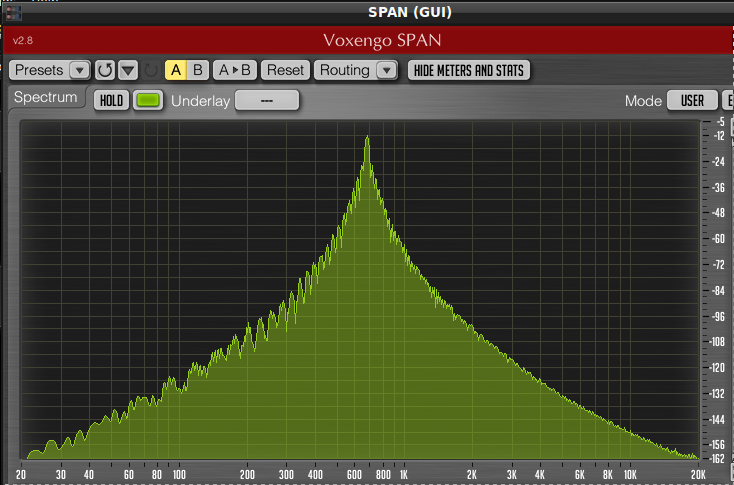 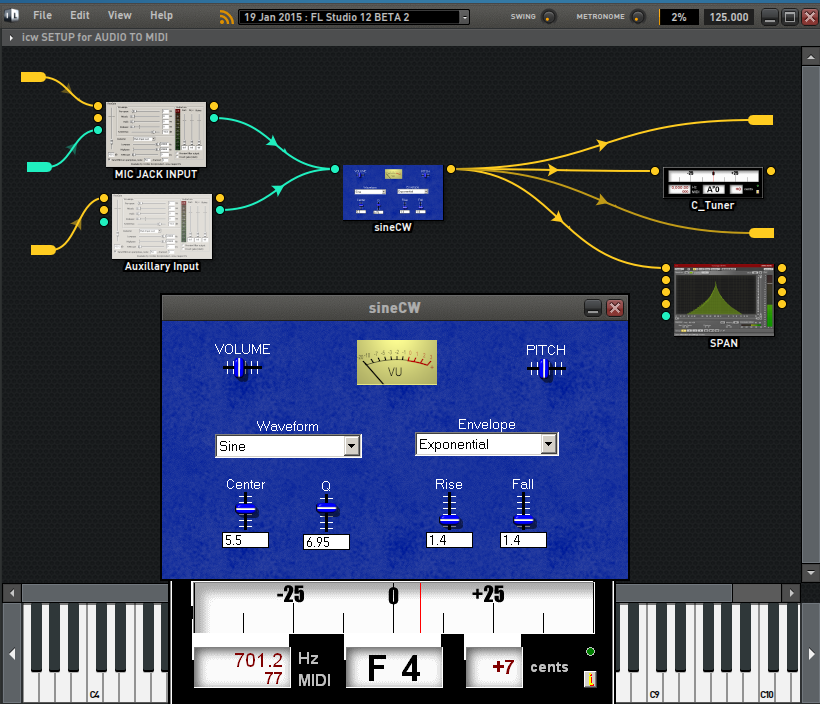 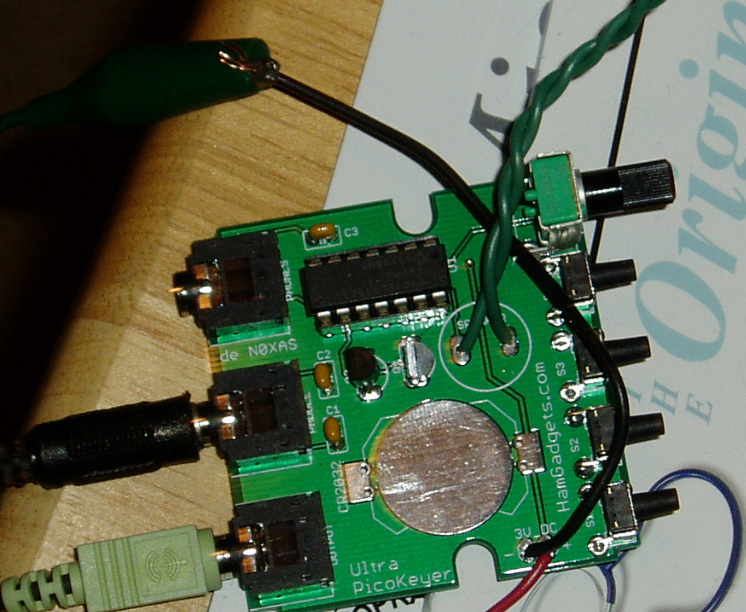 click on picture to enlarge to full screen view In this version of the circuit, we sub an H11F1 OPTOisolator instead of the PNP to trigger the 555 on pin 4.

The substitution of the H11F1  produced better qrq regeneration of the original timing of all cw elements.

In the picture below, a test result is shown, sending dits at 120 wpm from a k1el k40 cw keyer, to the input of the H11F1 input,  keying the css555 by lowering the resistance from PIN 4 to POSITIVE RAIL on keydown.  Measurements showed that precise timing was preserved: 10ms for all dits and spaces between dits.  This is a significant improvement over keying the PNP TRANSISTOR to connect pin 4 to Positive Rail. 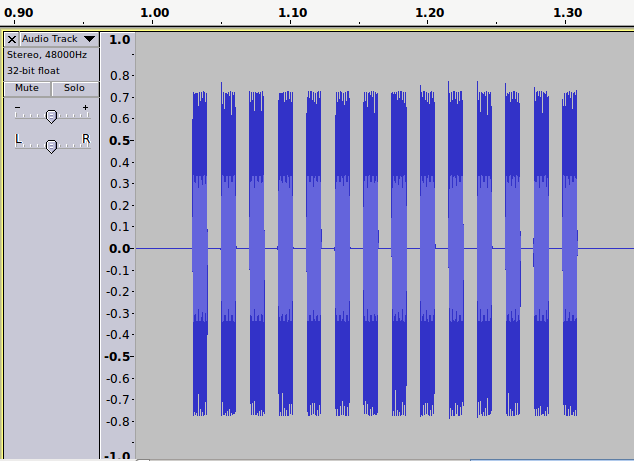 NOTE:   I am currently keying the css555 with a straight key and my k1el k40 cw qrq keyboard.  I am also using the ULTRA-PICO KEYER, which is keying the css555 too, to add my iambic paddles to the mix with his cw keyer circuit board.  At full charge of the 10 F cap, the resting current drain from the ENERGY HARVESTING MIC JACK POWER SUPPLY circuit(above)  -  is less than 10 uAmps  -    which is very low current drain when both the css555 circuit and the ULTRA-PICO KEYER are in standby mode. (rts - ready to send)

When either the css555 or the ULTRA-PICO KEYER -  is "keyed" to the ON STATE, then the 10 F cap, supplies all the current during active keying of the css555 circuit".  As soon as you stop sending, both circuits drop into RTS MODE, and draw only a few microamps of current in this standby rts mode.  This allows the MIC JACK POWER SUPPLY to start charging the 10 F CAP again.  The max current that my mic jack will sink is around 800 microamps.   On my laptop, using LINUX, the MIC VOLTAGE is approaching 3 volts at full charge on the 10 F cap. After a minute of KEYDOWN with the straight key,  the voltage on the cap only dropped  4 thousandths of a volt.  ( 2.919 volts to 2.915 volts)  So the 10 F CAP, is acting like a rechargeable battery supply in order to supply the full current to the ULTRA-PICO KEYER and/or the css555 circuit when keyed.

in butterFLY mode to control the CW PITCH of the CSS555 audio output tone:

I had a couple of the dual ganged 365 pf air variables in the junk box...
looks like they are a bit on the expensive side nowadays...
https://www.mikeselectronicparts.com/product/dual-gang-365pf-air-va...
http://www.peeblesoriginals.com/catalog/15.php

the TONE Is a square wave output from the CSS555 with lots of harmonics...the harmonics were filtered out in this video by a free VST PLUGIN software cw audio bandpass filter...
MBANDPASS
https://www.meldaproduction.com/MBandPass

using the dual gang 365 air variable CAP in a butterfly mode...where only the 'TAPS' on each of the 2 CAP lower sections are used...from one CAP section to PIN 2 of the CSS555 and the other CAP section to ground...makes the stray capacitance much less of an issue....as you can tell from the FREQUENCY SWEEP demo'd as i rotate the cap's main 3 to 1 ratio gear from @500 hertz to @1000 hertz. 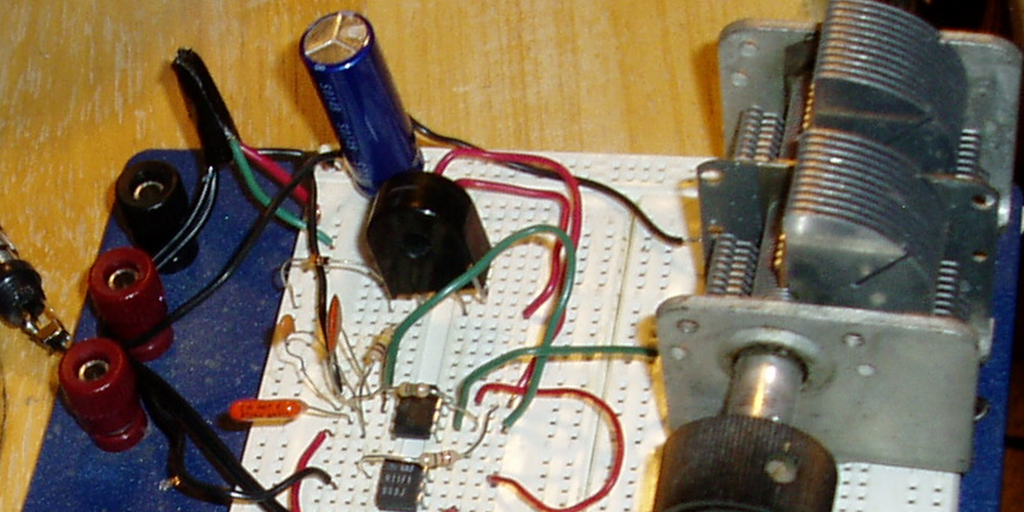 CW KEYING DEMO SETUP:
IAMBIC paddles, using an UltraPico Keyer's RIG keying output...and a Straight Key both connected to the GROUND of the CSS555 circuit, and the hot lead of st key and paddles is connected to PIN 2 of the OPTOfet...

CW KEYING DEMO SETUP:
IAMBIC paddles, using an UltraPico Keyer's RIG keying output...and a Straight Key both connected to the GROUND of the CSS555 circuit,  and the hot lead of st key and paddles is connected to PIN 2 of the OPTOfet...

the TONE Is a square wave output from the CSS555 with lots of harmonics...the harmonics were filtered out in this video by a free LV2 PLUGIN bandpass filter...
GLAME BANDPASS FILTER
http://plugin.org.uk/ladspa-swh/docs/ladspa-swh.html#tth_sEc2.9

the output of the CSS555 is connected to the input of the laptop MIC JACK (video shows the cable) from the MIC jack is goes to the GLAME bandpass filter and then to the speakers and the recording software for this video(simpleSCREENrecorder) see here:
http://i.imgur.com/TU9Gb5T.png

using the dual gang 365 air variable CAP in a butterfly mode...where only the 'TAPS' on each of the 2 CAP lower sections are used...from one CAP section to PIN 2 of the CSS555 and the other CAP section to ground..