sending a short text file from NASA NEWS, at 75 wpm. Timing is the main criteria since both keyboards are keying sineCW, a software code practice oscillator vst plugin, so they will "sound" the same for the most part, but how the cw is coded for precise morse [ element / spaces ] timing in software at qrq levels will be slightly different. YPLog has many adjustments to create just how you want your cw timing between elements and spacing to sound. CwType has only +dash to dot ratio & +inter letter spacing  to adjust for timing. Your vote and comments are welcome.

YPLog has incredible flexibility in creating a unique cw "fist" for qrq by all its available options for adjusting the cw timings for just about any parameter you can think of....here is a screen shot of the options screen for cw: 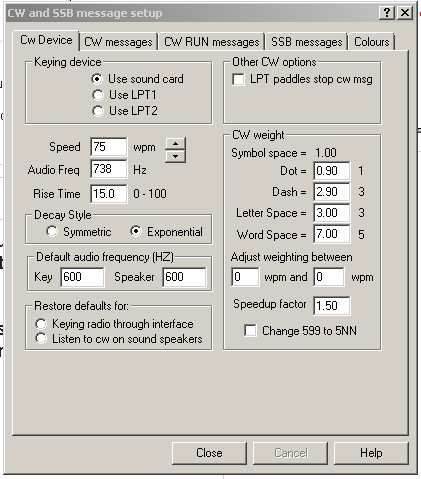 As you can see above, I purposely trimmed off .1 increments from both dash and dot length to take YPLog into a tiny bit of negative compensation for each element by exact time.

Here is the ROUND 2 of the qrq wars...CwType verses YPLog for how they naturally sound without regenerating their cw audio tones by recreating them...

ROUND 2: Testing the native sound of both CwType and YPLog, without regenerating their cw audio tones. Also demo'd is how to use either of these cw keyboards for sending morse code audio tones out over the internet using MUMBLE and 3 instances of a free VST HOST(pedalboard2).

here are some of the apps used in this video:
1. pedalboard2
http://www.niallmoody.com/apps/pedalboard2
2. vb-audio virtual cable ( virtual audio cable 1)
http://vb-audio.pagesperso-orange.fr/Cable/
3. vb-audio virtual cables ( virtual audio cable 2, and 3)
http://vb-audio.pagesperso-orange.fr/Cable/VirtualCables.htm
4. LOUDMAX VST PLUGIN, for AGC on mumble output( helps keep the volume steady on weak and strong signals)
http://loudmax.blogspot.com/
5. Mfreqshifter VST PLUGIN (to change pitch of anyone sending cw, so you can keep their signal at "your" preferred pitch)
http://www.meldaproduction.com/plugins/product.php?id=MFreqShifter

Ran a test using a different VST HOST -  REAPER.  Reaper has better WASAPI SHARED MODE support than pedalboard2 does.  I was able to run the apps with lower latency TO and FROM mumble using the same setup. 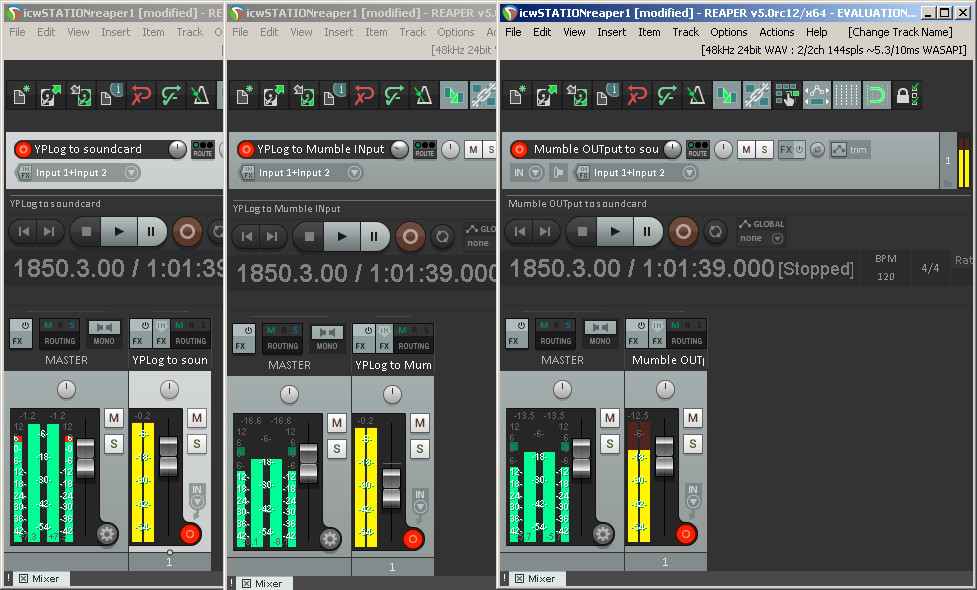 Here is a the 3rd part in this video series, where 3D SPECTRUM ANALYSIS and WAVEFORM shape are compared between these 2 software keyboards.

3d Spectrum analysis and waveform analysis comparison between
CwType and YPLOG at 75wpm speed. The last part also shows and compares a 3rd qrq cw setup using audio TO midi cw regeneration for a home brew approach using an external k1el keyer's audio output connected to the MIC JACK of the soundcard input, which gets regenerated by REAPER's own plugins to create a new raised cosine edged cw shaped waveform output which precisely duplicates the timing of the original cw element input from k1el's audio output into the mic jack.

Here are some screenshots of the audio to midi cw regeneration plugins and their settings that are shown in the video towards the end.  REAPER by itself can do all the work. Using just REAPER's WASAPI EXCLUSIVE mode, the latency from using the PADDLE at the mic jack by keying the k1el keyer, etc,  is only 12 milliseconds from the time you hit the paddle contact until you hear the tone.   This is exceptional low latency performance, for using the native REALTEK HD laptop soundcard...

HERE IS A PICTURE of the TAP TEST latency measurement..strike on the left is the tap on the paddle: 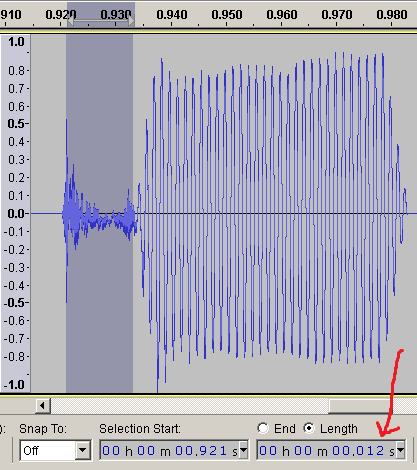 1.  the K1el sends its audio output to the MIC JACK INPUT and REAGATE, takes the volume of that k1el cw audio tone outpout, and creates a midi note output that goes to the next plugin, REASYNTH. 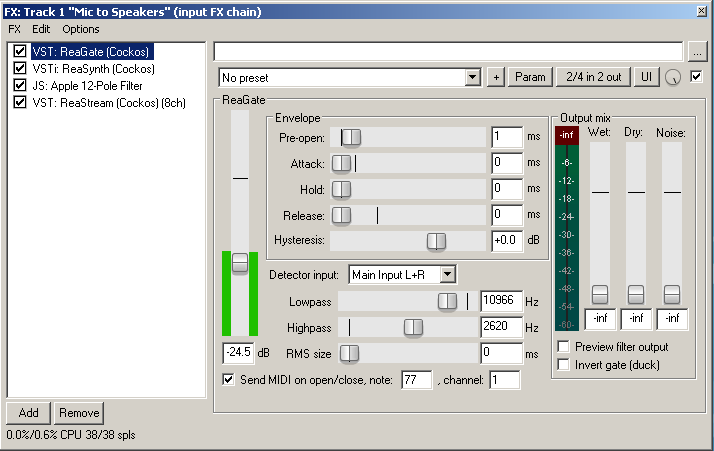 2.  REASYNTH is a sinewave CPO that is "keyed" by REAGATE, according to the exact element timing of the original k1el keyer's output into the MIC JACK input. 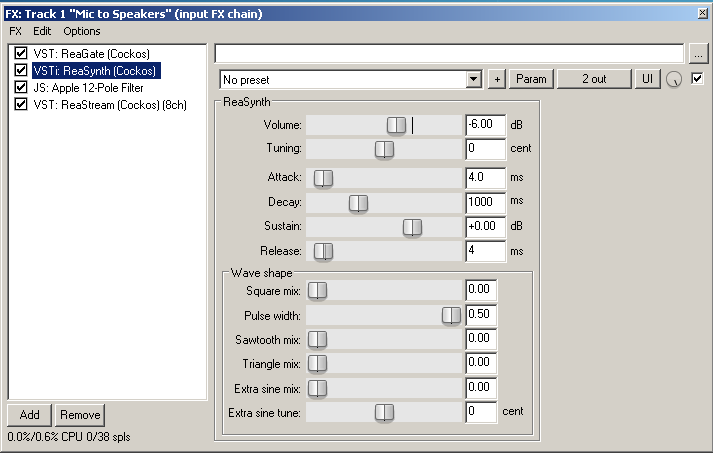 3.  bandpass filtering with the APPLE 12 POLE filter to clean up the edges 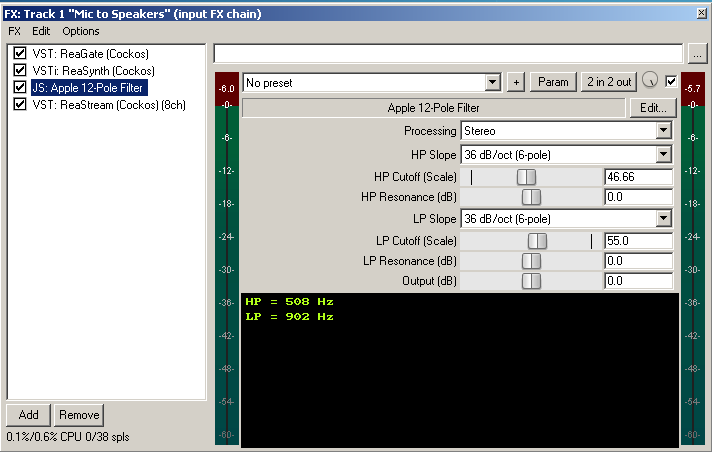