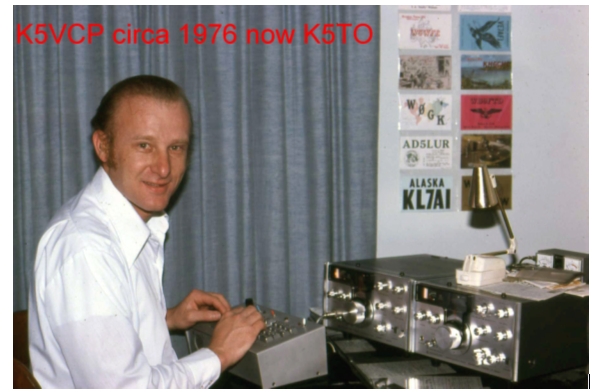 My interest in CW continued over the years. In 1960 I had a TO-keyer (Hallicrafters HA-1 by Jim Ricks W9TO) used in conjunction with HT37 and SX-111. However, at speeds approaching 45-WPM the HA-1 left much to be desired in terms of accuracy which was very operator dependent.

I followed keyboard development since ‘60s when QST featured a ferrite-core keyboard. However, it did not have a space bar or any buffer memory. This design resulted in mechanical aberrations created by ops with less than perfect typing skills. A keyboard design in the 70’s by K4KN contained a 1-character buffer but no space bar. The operator created both letter and word spacing. My preference was a buffered design to eliminate letter and word spacing problematic with a 1-character buffer. A Curtis design was available in the ‘70s but was expensive. The solution was to design my own keyboard. Since I worked as a design engineer of geophysical displays at Shell Oil Company I decided to design a Morse keyboard from the ground up.

The design was a digital sequencer with a multi-phase clock. It contained TTL logic, FIFO’s, and PROM arrays. The keyboard encoder design outputted a Hexadecimal character directly into a First-In First-Out (FIFO) memory. In the 70’s PC keyboards were not available so it was necessary to also design a keyboard encoder to get keyboard character output in digital form. The FIFO output directly addressed a Programmable Read-Only Memory (PROM) which was clocked parallel into a serial register that serially outputted the appropriate Morse character representing all defined Morse characters. The multi-phase clock provided 8-phases of decoding and serially extracted the Morse character retrieved from the PROM. The logic circuitry was extremely fast in comparison to actual keyboard speeds encountered in amateur radio. In order to troubleshoot the design on an oscilloscope without flicker a speed of 1500-WPM was established totally beyond human capacity to copy or send. Thus the keyboard’s accuracy at normal operating speeds was unparalleled. Gene Farthing K4KHT one of the best QRQ ops in the world at that time told me that the keyboard produced the best sounding CW he’d ever heard. Of course this necessitated making keying circuit changes to the Kenwood T-599X to accommodate the keyboard’s fast speeds and to preserve the typical 3:1 dash-to-dot ratio without additional weighting although the board did contain weighting circuitry.

Several prototype boards were built using wire-wrap techniques requiring a relatively bulky enclosure. Production PCB’s and injection molded cases were evaluated but became cost prohibitive yet much less expensive than the Curtis. Soon other buffered keyboards came onto the scene, such as the “Skipjack” and Heathkit among others. Consequently the K5TO keyboard was never mass produced. The board was in use well into the 90’s when PC software evolved to the point of meeting the accuracy demands of QRQ CW. I now use a software design by VE6YP called YPLog, a logging program which has one of the best CW generators.

In the 70’s there was a group of QRQ CW ops who formed the 5-Star Club. These were ops with copy verified at 80-WPM (conversational CW). Unfortunately the Club preferred a non-buffered keyboard (the K4KN keyboard with its 1-character memory). I was not allowed to qualify for 5-Star membership because of the buffered keyboard. I expressed my disappointment to Bill Eitel WA7LRU / W6UF, who managed the club, but the restriction was never changed. Such speeds are not important to me today but still possible. Though I never became a 5-Star Operator the fun I had with QRQ CW surpassed all ham activity I’ve experienced in my lifetime. I made many friends and had fun QSO’ing ops who simply enjoyed QRQ CW communication. I’m still active today with a Ten-Tec Corsair transceiver (modified slightly for QRQ) using Ten-Tec Centaur as an amp (QSK capable). A 2nd station transceiver owned is the Jupiter but it has problems with DSP Chip programming loop delays that Ten-Tec has not addressed. The Jupiter can easily run up to about 80-WPM if delays corrected. Those delays have been addressed for the internal keyer but not external keying.

Due to living in a court-yard home environment I’m limited by HOA to no antennas. However I have a 40-M inverted vee in a nearby tree so when conditions permit look for me on about 7.020. Hopefully the bands will improve as we enter the upcoming sunspot cycle but presently the band condx are very poor. Best QRQ. 73, Wally – K5TO

Permalink Reply by Chuck aa0hw on May 22, 2008 at 5:51am
A MOST EXCELLENT ARTICLE WALLY !
really enjoyed it
and my only question is....
Where can I get one of these K5TO KEYBOARDS ?
1500 WPM ACCURACY WOW.... Wait until the meteor scatter ops hear about this !

I think your keyboard is Smithsonian Institution WORTHY !
We need to get one of the K5TO KEYBOARDs up there to them WALLY ! Permalink Reply by fred ryan on May 22, 2008 at 8:58pm
Wally was correct in his keyboard design. The goal of QRQ QSOs should be to increase the ease and speed of QRQ CW. Bill Eitel of the 5-Star QRQ club was out of line for not admitting him to the club because he was using a board with a buffer and a space bar. Bill was an advocate for improving the means of increasing the ability to send QRQ using a keyboard. He contradicted himself by opposing the use of a buffer and a space bar by Wally. The goal of QRQ CW sending is to send as perfect CW as possible so that the other operator can comprehend it. To my information Bill Eitel never achieved high end QRQ himself so was in no position to restrict the sending to only the first generation of keyboards and reject later technology improvments. Fred-W3NJZ

Permalink Reply by Joe on May 24, 2008 at 1:19pm
What a great story about the days when we didn't have keyboards. I remember listening in to Bill Eitels group after I got out of the service. I thought they were sending using electronic keyers! The buffer controversy is beyond me, though. I am awaiting the rebirth of sunspots out here on Maui so I can try my hand at QRQ.

Permalink Reply by Joe on February 4, 2010 at 11:27pm
How did you modify your Corsair for QRQ, Wally? I have an old Corsair and would be interested in your thoughts on how I could improve its already good QSK capabilities.