This video demonstrates a method to hook up your cw paddles, key and bug to your Linux computer. Dahdidah is the application chosen to perform the software cw keyer functions. A USB TO SERIAL PORT ADAPTER is used to interface the morse code instruments directly to the serial port pins to "key" Dahdidah. Jack Audio is the Linux sound engine used, with KXSTUDIO's CARLA and CADENCE. Dahdidah uses the serial port to "key" its CODE PRACTICE OSCILLATOR sound system. Dahdidah will use the WINEASIO - ASIO DRIVER - for the best audio production with near zero latency.

Using your straight key, and an external Code Practice Oscillator's audio output, connected to your computer's MIC jack input, this video shows an effective way to filter out the harsh square wave harmonics of most CPO's.

NOTE: The filtering is very tight in this example, as an experiment to try and achieve zero harmonics down to {minus - 160 db} as show on the spectrum analyzer...you can however, loosen up the bandwidth greatly in order to get whatever kind of "keying" you desire...

The software apps are all free LINUX LV2 plugins.
The connection bay, is CATIA for JackAudio
- Jack Audio makes it very easy to wire up this setup -

Reaper now has a beta, native LINUX version. This video shows how to use the plugins that install with reaper to recreate the original incoming audio cw tone(from the mic jack input from any external CPO audio output) with exact timing....so instead of using multiple filtering LV2 plugins to get rid of the harmonics of the source CPO TONE... regenerating the cw that inputs through the MIC JACK obviates the need for having to reduce the square wave harmonics shown in the first video demo.

This picture shows the 2 files you will need if you want to try this:
http://i.imgur.com/OpycDRX.png

here is the forum discussion where you can find the download link to the beta LINUX VERSION of reaper:
http://forum.cockos.com/showthread.php?t=85588

NOTE: once you have both files downloaded and unzipped, you have to take the libSwell.so file, and move it to the sub-folder where your reaper5 excecutable is located(shown in video)

NOTE: here is the wiring diagram, for this setup:
http://i.imgur.com/mfaZXtV.png

NOTE: the 3 plugins that recreate the original cw audio tone:
1. REAGATE, you set the threshold to trigger a MIDI NOTE output at your desired sidetone pitch.
2. REASYNTH, is the sine wave synthesizer that creates the sine wave output tones. You control the rise and fall time by adjusting ATTACK and RELEASE.
3. Apple 12 pole filter, is used as an audio bandpass filter

GETTING RID OF STRAIGHT KEY DEBOUNCE 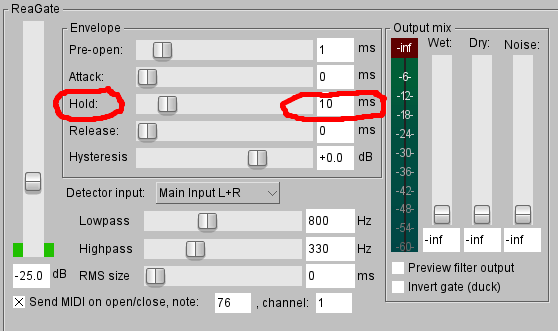 and here is a good example of how well REAPER does at preventing switch debounce...on the TOP of this SCOPE VIEW, is the original incoming straight key cw audio tone, that has gaps/jitter/debouncing in it...and on the bottom of this SCOPE VIEW shows REAPER perfectly fixing it and preserving the whole cw tone in tact: NOTE:  since we are using MIDI NOTE OUTPUT to recreate the original tone,  the MIDI NOTE OUT message will tell the REASYNTH sine wave synthesizer to TURN ON as soon as the REAGATE THRESHOLD OF VOLUME is reached and triggered,  PLUS it will STAY ON an additional - for however long you set the HOLD TIME....ie no matter if the original tone starts/stops/starts/stops  repeatedly due to your straight key mechanical switch debounce jitter...that jitter time - if it is less than the REAGATE HOLD time,  the JITTER GAPS of the original waveform due to switch debounce, will NOT get transferred to the MIDI NOTE OUT message...REAGATE will tell the MIDI NOTE to continue to STAY ON for whatever the REAGATE HOLD TIME is set to...in the above example that would be 10 milliseconds...which is longer than the gap you see in the GREEN TOP VIEW of the debounced original cw waveform   etc...  so the GAP JITTER does not damage the bottom RED WAVEFORM on the scope as you see...the CW is perfectly reconstructed by this method...and only a few milliseconds of extra element length is the "price" to pay for this, which at straight key speeds, is insignificant and unnoticeable.

Using your own hardware Straight Key, and the vintage linux plugin for Xchat called CWIRC ... by using your ST KEY to close Serial port pins DTR and CTS(or DSR) - to key CWIRC's sidetone (or your USB to SERIAL PORT adapter...) you can hook up your STRAIGHT KEY to close the circuit on the serial port pins between the DTR pin and either the DSR or CTS pins to create a very nice sidetone with the option of audio bandpass filtering it ....again with native LINUX audio LV2 plugins.

In this example, i am using an LV2 PLUGIN called THE CALF FILTER as an audio bandpass filter. The rise and fall time of CWIRC is normally @ 2 milliseconds...with bandpass filtering you can smooth out the edges as much as you want...

in order to get the lowest latency and be able to use PULSEAUDIO for this CWIRC PLUGIN, you have to first bring up Xchat with the linux terminal using this command: | aoss xchat | In order for that to work, you have to have alsa-oss already installed: http://packages.ubuntu.com/search?keywords=alsa-oss

then once Xchat is loaded, you have to connect to any Xchat server, and then disconnect...then bring up the CWIRC Userlist Buttons and you will see CWIRC (once you have downloaded and installed it of course...same for Xchat)...Click on CWIRC and you will load the GUI for the CWIRC CW KEYER.

Xchat will send its audio output to PULSEAUDIO via the pulseaudio ALSA PLUGIN. PAVUCONTROL is highly recommended for this:
https://launchpad.net/ubuntu/trusty/+package/pavucontrol

NOTE: if you have PULSEAUDIO 6.0 or higher, you can make your own pulseaudio GUI just for CWIRC....in terminal you can type something like this:
pacmd load-module module-jack-sink client_name=CWIRC
(this is using the PULSEAUDIO-MODULE-JACK)

see this wiring diagram for the JackRouter connection bay for this setup: http://i.imgur.com/1Fsn0xe.png

NOTE: KXstudio's apps for JACK are utilized in this demo...http://kxstudio.linuxaudio.org/

In this video example, we demo how to send MIDI MESSAGES with your straight key, hooked up to the input of a HARDWARE MIDI DEVICE(midi keyboard in this example) Arduino and many other brands of SBC boards will allow you to construct your own MIDI DEVICE HARDWARE, able to send midi messages of NOTE ON and NOTE OFF to a software sinewave cw keyer plugin like sineCW shown in this video. The midi hardware device "reads" your KEYDOWN and keyup in perfect timing, and sends a MIDI NOTE ON and MIDI NOTE OFF accordingly to the software cw keyer.

you can read more about the sineCW home-brewed vst plugin here:
http://qrqcwnet.ning.com/forum/topics/home-brewed-software-code-pra...

NOTE: this example uses WINE for LINUX in order to use a windows VST HOST and a windows VST PLUGIN SYNTH....there are many synthesizer apps to choose from in LINUX - that you can use instead of having to use WINE and this VST PLUGIN.

Using SEREN, a voice chat Linux app that operates from the LINUX TERMINAL, you can have a qso over the internet with your Straight Key, with up to 9 other CW OPS that are using the same basic LINUX APPs setup as you.

SEREN uses the OPUS CODEC. And it really does a great job in transmitting morse code audio tones over the internet.
http://holdenc.altervista.org/seren/
https://www.mankier.com/1/seren

... download the SEREN Source code FILE, and extract it...then use the typical | ./configure | | make | and | make install | commands to get SEREN installed. Then you can just bring up your TERMINAL and load SEREN. Seren, operating from the Terminal, uses less CPU than other apps like MUMBLE, SKYPE etc... Seren gives you the option of encrypting your data. Seren also has text messaging right from the terminal...